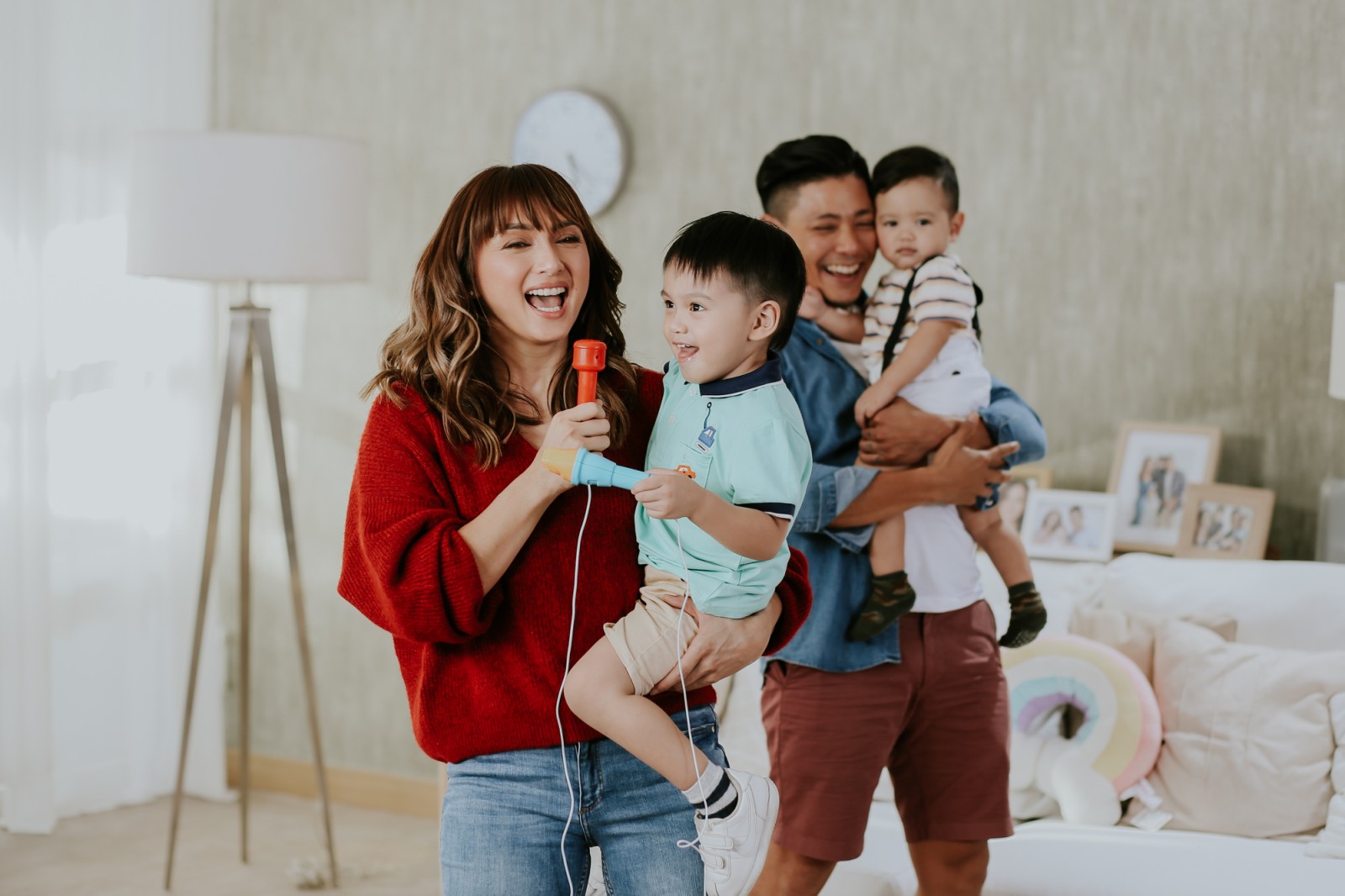 Drew Arellano and Iya Villania are role models for Filipino families. They are especially popular on social media, where millions of followers watch as they raise three adorable children: Primo, Leon, and Alana.

Despite being a celebrity family, they have an aura of approachability that makes them relatable. This became more evident during the COVID-19 pandemic when they were affected by the quarantine restrictions just like everyone else.

“We’ve been staying home. Each day, it’s the same routine. We wake up, have breakfast, work out and the kids play. I’m just waiting for them to say ‘so when do we mix it up? When do we go outside?’ So far they’re still okay. They have each other and that’s an important thing,” Drew says.

Iya adds, “We’re fortunate to be able to say that we’re doing well. More than anything, it’s the company and because we keep each other happy, no matter where we are.”

To adjust, Drew and Iya allowed their children to decide what they will do for the day. The parents ask if they want to cook, read, or work with numbers. Screen time is also welcome since it provides an opportunity for learning. According to Drew, “when you’re trying to teach your kids, we have to go with the flow. We just have to regulate it and try as much as possible to inject it with learning.”

Iya agrees, saying, “You have to give them options because it gives them a sense of power. It’s only natural for every human to want to feel that way. Drew and I are aware of how we felt when we were going to school and we don’t want to have to enforce that on our kids.”

This unstructured method for learning has proven to be effective. Allowing their children to go at their own pace, when they’re ready to understand and absorb information, making learning faster. Soon, they were surprised when Primo began adding double digits.

Naturally, the Arellanos are considering a combination of homeschooling and unschooling. Unschooling is a form of education where students learn at their own pace, in a supportive setting that encourages curiosity.

The parents are just as decisive about their children’s health. Their approach is a mix of affection and medicine.

“One of my tips would be to give your kids a lot of hugs and kisses. When it needs to be taken to the next level, then that’s when you get to something that’s no-fail and that would have to be Calpol for Kids,” says Iya. “Especially kung kaunting fever lang, oh my goodness. Nakakakaba.”

The couple tells a story when Primo, their eldest, had his first sickness. The couple shares, “As first-time parents, raising a kid was kind of like walking on eggshells. We weren’t sure what to do. It was a good thing we had their grandparents to guide us.”

The parents became more experienced as Primo grew older, which became helpful when Leon and Alana were born. Fortunately, the children are generally healthy.

The family trusts Paracetamol Calpol for Kids, which helps with fever and pain due to toothaches, headaches, migraines, muscle aches, sore throats, and musculoskeletal discomfort.

Iya shares, “doctors always ask ‘May fever ba?’ I feel like it boils down to a fever, so it’s nice that we have Paracetamol Calpol for Kids that we can rely on. That will definitely make them feel good after a dose because it’s so fast-acting.”

The Arellanos advise parents to always have paracetamol fever and pain relievers at home. Iya says “you don’t know when you might need that. You don’t want to have to worry and wait until magbukas ‘yung mga stores before you can act on it and get medicine.”

Drew agrees, sharing, “You’ll have peace of mind knowing that when you have Paracetamol Calpol for Kids, chances are, bababa fever ng anak mo. It’s so painful as a parent to see your kids na nanghihina. Sana ako na lang.”

For World Immunization Month this August, the Arellanos are reminding parents to get their children vaccinated. When they are inoculated, they build antibodies that protect them from diseases, even if they develop them as adults. Data from the Centers for Disease Control and Prevention (CDC) say that routine vaccinations during childhood help stop 14 illnesses.

One of the common side effects of getting vaccinated is fever. Paracetamol Calpol for Kids can help. It can relieve fever in just 15 minutes while still being gentle on your kids’ tummies. The medicine comes in orange and strawberry flavors, making it easier for parents to give children their doses.

The couple says, “trust the science and your pediatrician. They know what’s best for your kids.”

To know more about Paracetamol Calpol for Kids, visit calpol.com.ph or facebook.com/CalpolPH.

You can also purchase Paracetamol Calpol from the GSK Lazada and GSK Shopee pages.

1 The Importance of Childhood Vaccinations

3 Why Childhood Immunizations Are Important 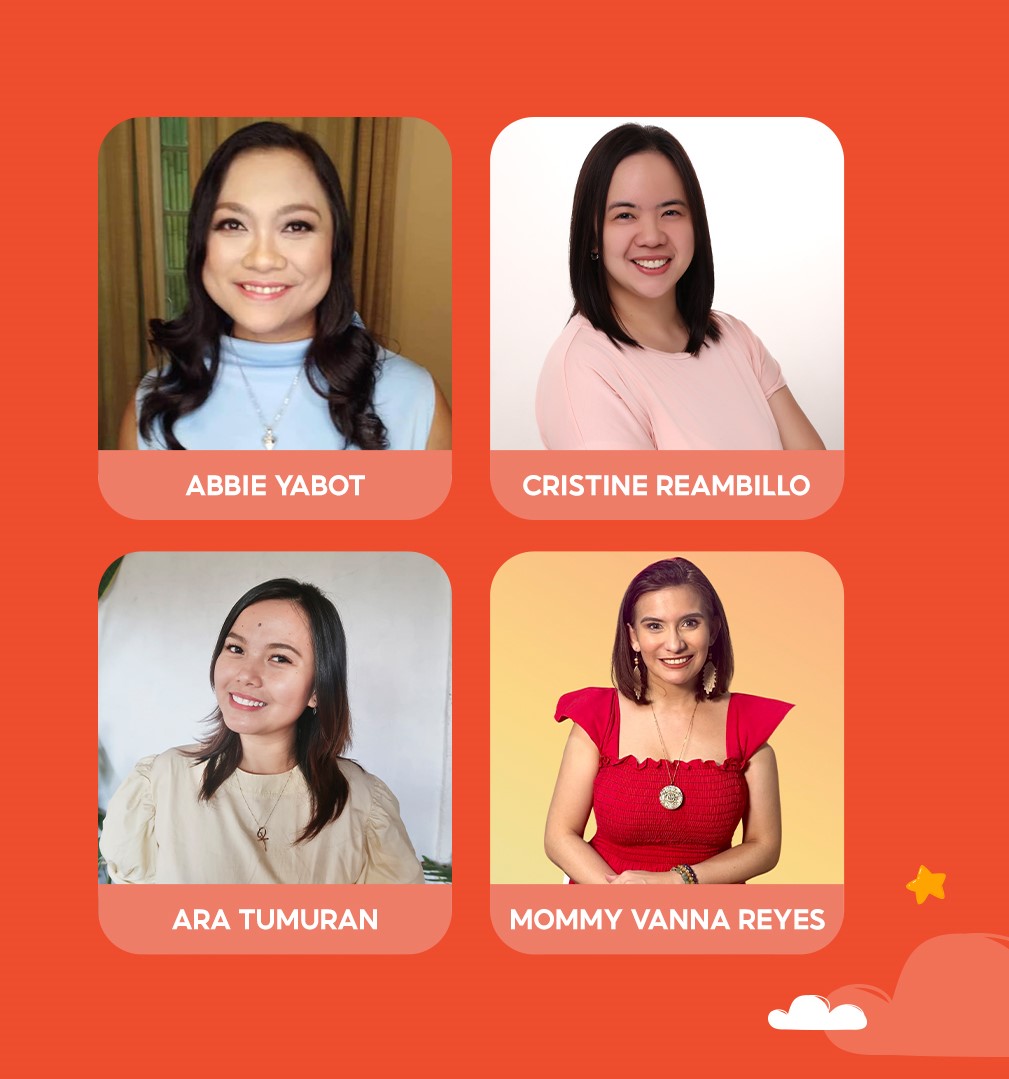 Shopee, the leading e-commerce platform in Southeast Asia and Taiwan, invites moms and soon-to-be-parents to sign up for the Mom’s Club Special, its first member-exclusive webinar, this August 16, 10:00 AM to 12:00 NN. Attendees can gain insights on parenting from fellow moms and subject matter experts, win exciting prizes, and get a preview of the member-exclusive deals on Shopee Mom’s Club.

Motherhood can be pegged as one of the most demanding jobs in the world, and it doesn’t come with a how-to manual. The pandemic has added to the existing challenges parents already face, with heightened concerns and fears over managing child care, coping with the changing landscape, and meeting work responsibilities. Shopee caters to the evolving needs of mothers through Shopee Mom’s Club, where members enjoy one-stop access to top global brands for baby products, as well as exclusive parenting content from mothers and experts on Shopee.

At the Shopee Mom’s Club Special, attendees can tune in to a wide range of discussions covering a variety of parenting stages:

Mom’s Club members can register for the webinar via https://shp.ee/a5q6yq7 until August 15. Slots will be confirmed via email on a first-come, first-served basis.

Starting August 16, Shopee Mom’s Club will offer members exclusive deals up to 60% off from a wider selection of brands that suit their family’s needs, including more health and beauty products and groceries. Users who sign up can enjoy benefits such as a welcome gift, exclusive discounts and vouchers, curated collections, and access to talks from experts and fellow parents on Shopee Momdays on Shopee Live. 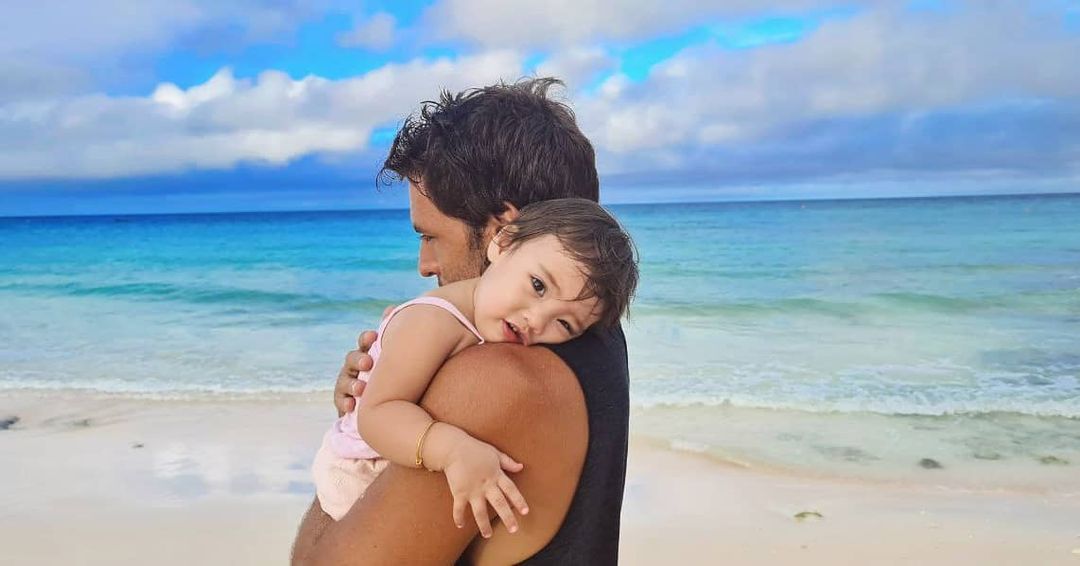 The couple spent their second Father’s Day over the weekend with Tili who may just grow up to be as active and as adventurous as her famous parents.

To keep her going, and to make sure she grows up healthy, they’re training her early to develop a water habit. Nico and Solenn both lead an active lifestyle and swear by water to keep themselves hydrated and detoxified.

Nico admits to being a water junkie who consumes about 5 liters of water a day, more than the average required amount of water per person per day.

“We can’t go without water. It flushes out waste from our bodies, regulates body temperature, helps the brain function, and gives us the energy we need throughout the day. What I do is drink 1 liter of water first thing every morning. And to make sure I don’t forget to drink, I always make sure to carry around a bottle of water all the time, even at home. Luckily Tili loooo-oves water, so I’m reminded to drink every time she does,” confesses Solenn.

Nico is very determined to get their baby daughter to develop a water drinking habit, right here, right now. “Introducing your babies to love water is most important,” he says. “They are in the most important stage of their life where they are growing, and sometimes what you give them can get them sick very fast. So you have to make sure that they drink water often. And if they don’t wanna drink, you need to force them a little bit to take enough water — because it’s one of the most important aspects of their growth. It’s not about the juice, It’s about the water.”

Adults need to make hydration a habit as well, according to Nico. “When you hydrate, your skin looks better, you feel better and you know, your whole body works better. You have more energy. I do a lot of sports and I work out every day, so if I’m not hydrated, I don’t have the energy to work out. The healthiest thing we can do is drink water. Look, if you’re sick, if you have the flu, you drink water so you flush the toxins out,” Nico explains.

Both Nico and Solenn have a water regimen that helps them to stay fit and active. “I drink water first thing in the morning because my metabolism shoots up if I drink water before I eat anything. So basically, I cannot imagine anyone not drinking enough water because that has so many negative implications for health, the way you look, the way you feel, the way you sleep. At the end of the day, water is life,” says Nico.

“Just make sure you trust the source of your water,” adds Solenn. “Know where that water is coming from — and that you trust the people behind the brand. We chose Nature Spring because they offer quality drinking products that are safe and affordable.

Check out https://shop.naturespring.com.ph/ to learn more about Nature’s Spring products and promos.