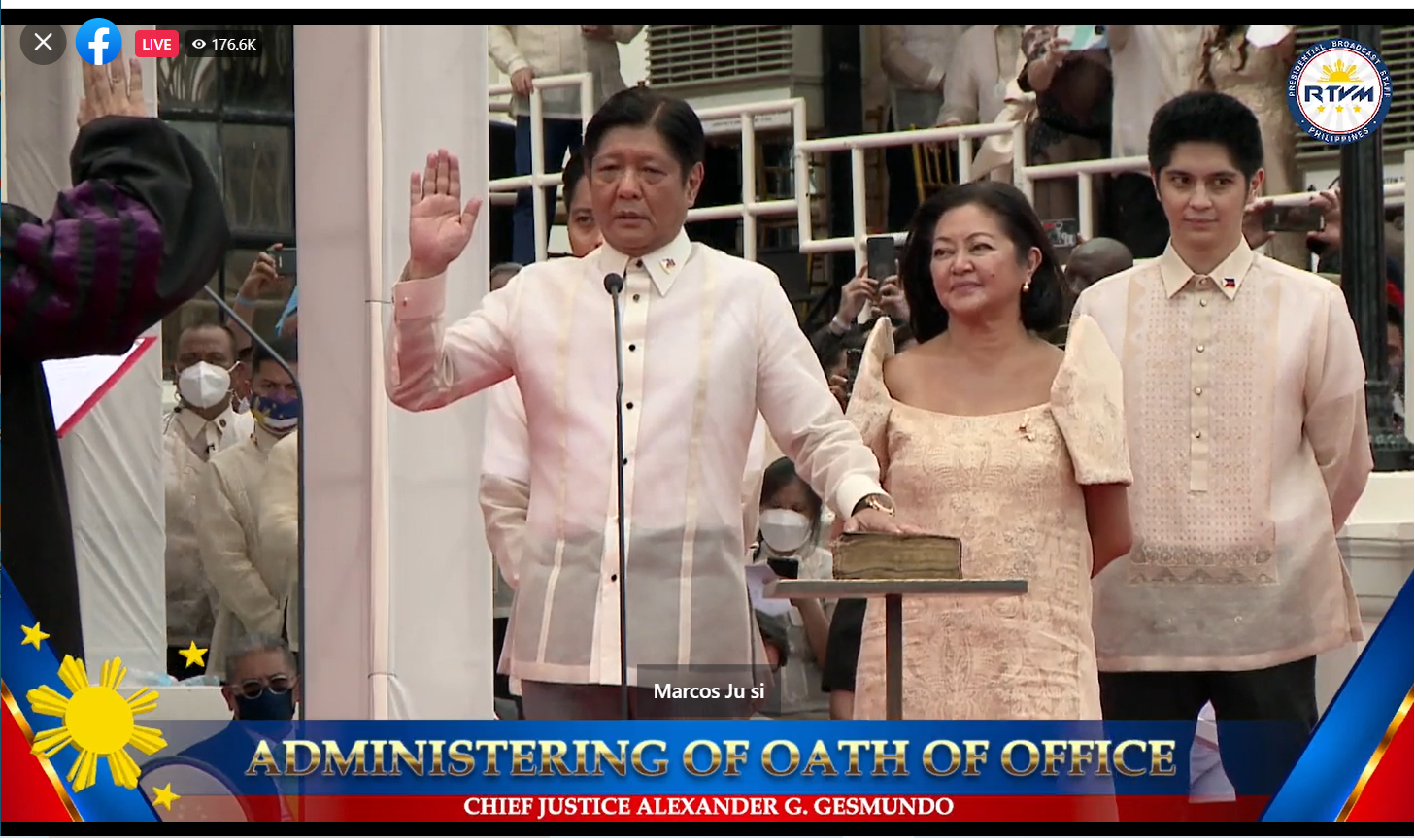 The inauguration of President Ferdinand “Bongbong” Marcos Jr., the 17th President of the Republic of the Philippines.

On June 30, 2022, Filipinos witnessed the inauguration of President Ferdinand “Bongbong” Romualdez Marcos Jr., the nation’s 17th president amidst the challenges of the pandemic and pressing economic issues that will confront his new administration.

The inauguration was held at the historic National Museum of Fine Arts in Manila. President “Bongbong” Marcos was the fourth President to be inaugurated in the same venue following Manuel Luis Quezon (1935), Jose P. Laurel (1943), and Manuel A. Roxas (1946).

The President and the other members of the First Family wore Filipino attire as a symbol of their patriotism in action, words, and even in their manner of dressing. His inaugural barong was designed by Pepito Albert. It was inspired by a traditional military uniform during Spanish time. For his dinner barong, it was again designed by Albert and was made of pina barong from Taal, Batangas paired with shoes from Sapatero Manila.

For the First Lady Atty. Liza Araneta-Marcos, her terno was designed by Leslie Mobo. It was made of pure pina, seda, and suksuk embroidered with Sampaguita, the country’s national flower. It was paired with shoes designed by Lila Almario of Greggs Frame.

In his inaugural address, President “Bongbong” Marcos extends his gratitude for the support of the Filipinos. “You rejected the politics of division . . . You made it happen. . . You picked me to be your servant . . . I don’t take it lightly but I’m ready for the task, ” he said. “I am here to talk about the future, a future of sufficiency . . . Imagine what you and the government can achieve together. We are here to repair a house divided, to make it strong . . . Never forget we are Filipinos  . . . let us all be part of the solution we chose.”

President Marcos stresses that he and the Filipinos share the same dream. “Pangarap n’yo ay pangarap ko . . .” (Your dreams are mine).

He adds that “We will build back better . . . in the experiences that we had . . . There were shortcomings in the COVID-19 response; we will fix it . . . I will complete on schedule the projects that have been started; I am not interested in getting credit.”

Plans are being carried out for agriculture and food sufficiency, education, public health system, tourism, climate change, infrastructure, and business, especially for the MSMEs.

The inauguration was characterized by solemnity, simplicity, and keeping with the tradition. It was attended by foreign dignitaries, VIPs, public officials, and Marcos supporters. Marcos is considered the majority president elected with more than 31 million votes garnered from the recently concluded 2022 presidential elections.