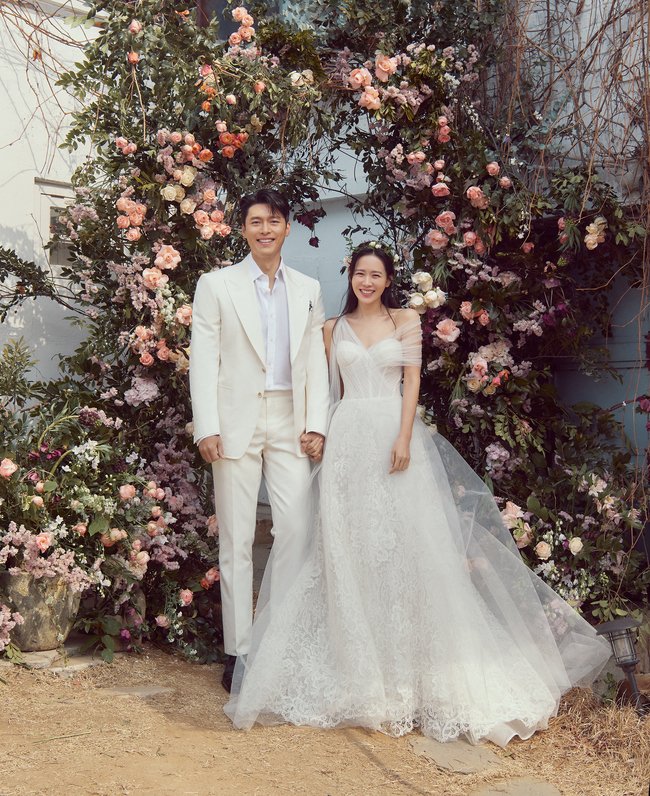 K-drama fans are rejoicing as the legendary couple Hyun Bin and Son Ye Jin finally got married at the Aston House of the Grand Walkerhill Seoul Hotel on Thursday, March 31. The couple has been popular since the success of their drama ‘Crash Landing On You,’ which has hit Korea by storm, also garnering tons of viewers internationally. For the netizens, the wedding was truly a certified K-drama fairytale ending.

The wedding itself was a private and solemn event, limited to only 300 guests alongside the couple’s families. Earlier that day, the actors’ agencies, VAST Entertainment and MSTeam released a statement regarding the wedding. “Actors Son Ye Jin and Hyun Bin are holding their wedding ceremony today, taking their first step as a married couple. The ceremony will be private in consideration of the situation with COVID-19, so we ask for your generous understanding. We are sharing the news with their wedding photos instead,” they said.

Furthermore, the agencies acknowledged the fans’ excitement for the so-called wedding of the century. “We express deep gratitude for the many blessings and warm support sent for their new beginning. Actors Hyun Bin and Son Ye Jin along with their agencies will continue to put in full effort to give back for the love received,” they added.

With several celebrities in tow, the ceremony started at 4 PM, followed by the reception. It was a star-studded event as the couple has numerous friends inside and outside the industry. Among the attendees are Gong Hyo-jin, Lee Min-jung, Uhm Ji-won, Oh Yoon-ah, Jung Hae-in, Ahn Sung-ki, Park Joong-hoon, and Ha Ji-won. Korean singer Gummy also sang the ‘Crash Landing On You’ theme, ‘Give You My Heart’, originally sung by IU.

Hyun Bin looked positively dashing in a cream-hued suit and a white button-down top, while Son Ye Jin wore a stunning wedding dress from Vera Wang’s Spring 2020 Bridal collection. Another photo featured Hyun Bin in a cream blazer partnered with a high-waisted pair of black trousers and a bowtie, and Son Ye Jin captured hearts with her Elie Saab gown from the brand’s Spring 2022 Bridal collection. The couple exchanged vows on an altar adorned with pastel-toned flowers.

Aside from their hit drama, the BinJin couple has also co-starred in the 2018 film ‘The Negotiation’. When they came together again to shoot ‘Crash Landing On You’, their chemistry bounced off the screen as the K-drama fans went crazy with their sweet scenes and the pure love the duo showed on screen. Their relationship went from reel-to-real in January 2021, when they confirmed their relationship, much to the delight of the netizens. The couple’s engagement last February 10 has been icing on the cake.

When Ye Jin announced her engagement, she was certain that he was the one for her. “I thought long and hard about how to share this story because it’s an important one. I found someone to spend the rest of my life with. Yes… it’s him,” she said in an Instagram post.

Hyun Bin also felt the same way as he also shared his thoughts on Instagram. “I made an important decision to get married, and I’m going to carefully step into the second phase of my life,” he said. The couple is certainly in touch with their fans and is certain of their love for each other.

The #TheBinJinWedding also trended in the Philippines, with fans showering them with their best regards and congratulating them on their wedding. Having seen the couple’s undeniable chemistry, it was like a fairytale to see them get married for real.

We wish the BinJin couple a happy and wonderful marriage. Congratulations to the newlyweds!