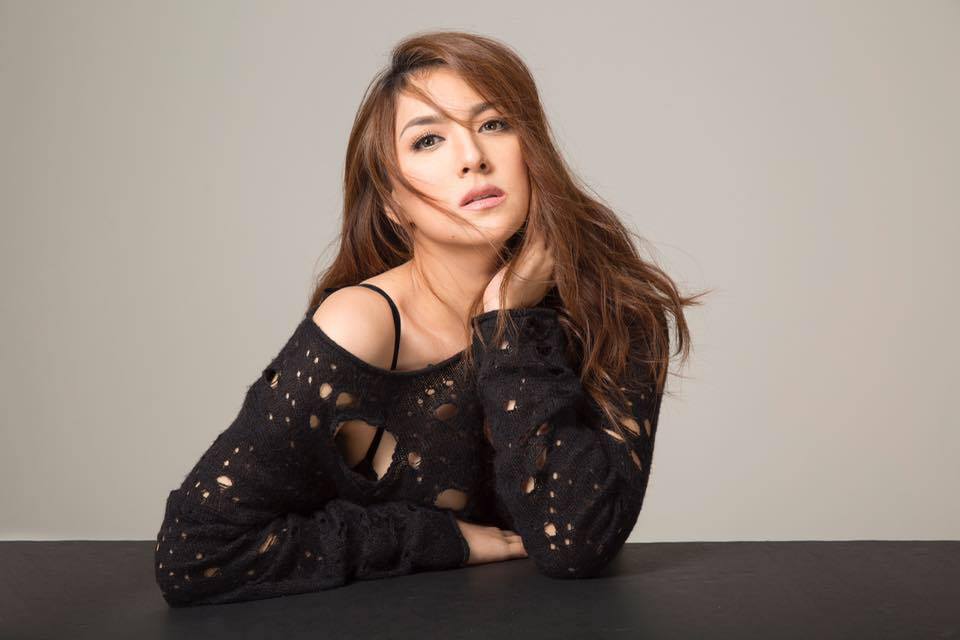 “Ara Mina has a certain innocence and is in a category completely her own,” according to Direk Carlitos Siguion-Reyna. It helps that the actress is sexy and charming in person. She titillates readers with candid remarks on her sexuality. Meanwhile, this interview reveals a half-child, half-woman excited and eager to give her best shot.

Having a great body makes her more confident. Ara Mina described herself as “dibdib manok. Medyo hiwalay siya (referring to her breasts), so you need to push it, to achieve a cleavage. Sometimes it depends on the dress or bra I’m wearing.”

To maintain her 36-24-35 shape, Ara Mina said she works out at a gym twice a week and observes some dietary restrictions. “I have my dumbbells,” she volunteered. She said she has not eaten rice for two months now. Also, soft drinks have not been in her diet for two years.

Her liberal view of woman-to-woman relationships

Back to her past movie “Tatlo,” Ara Mina admitted she felt uncomfortable kissing another girl.

Ara Mina, however, confessed that she has a liberal view of woman-to-woman relationships in real life.

“It’s fine with me. In “Tatlo,” you can’t blame Elsie (my character in the film) if she falls in love with another woman (Rita Avila). She’s looking for something that she cannot find in her husband (Tonton Gutierrez).”

She recalled how she experienced difficulties doing a love scene with Rita. She called it the “Scandinavian style” ( a pumping scene between lesbian lovers, but she did not explain it in detail).

Ara Mina admitted that she can be attracted to members of both sexes.

But she denied being bisexual.

Reflected Ara Mina: A man is completely different from a woman when it comes to expressing affection.

In real life, Ara Mina said she has had lesbian suitors.

Now that she gets to portray meaty roles, Ara Mina hopes that she will be noticed for her acting ability and not just her ability to show off those curves.

She said she’s only daring in the movies. But she emphasized that she hasn’t experienced doing her onscreen love scenes in real life.

“That’s one good thing about me. At first, it was really difficult for me because I used to portray sweet roles. Like the scenes in my previous movie, “Sagad Sa Init” na nakipag-laplapan ako sa bubungan at sa kotse. As of now, ‘yong mga wild things na nagawa ko sa movies pa lang.”

Ara Mina’s life changed when she junked her sweet image. But the transition was not easy. Going the bold route made it possible for her to land her first starring role in “Maldita.”

But it was in the movie “Curacha, Ang Babaing Walang Pahinga” that film critics began to pay attention to her. Before this, she became a supporting player in such movies as “Roller Boys,” “Butch Belgica Story,” and the “Flor Contemplacion Story.” She entered showbiz at the age of 14 via the teenybopper show That’s Entertainment.

Ara Mina said she couldn’t imagine herself portraying bold roles or posing nude for pictorials. She was conservative then, she said. She recalled how she would react negatively to the bold pictures she saw in the newspapers.

Because of the attention, she’s getting at the moment, she vowed never to let success get into her head. She said she is especially thankful to her parents for understanding her when she decided to go bold without their permission.

In the near future, she hopes to bag an acting award, “Para masabi ko na rin na may narating yong paghuhubad ko,” she said.

Ara Mina is Hazel Reyes in real life. Her mom combined the names of her two sisters Ara Christine and Mina Princess to come up with the name Ara Mina.

The eldest in a brood of six (two boys and four girls), Ara Mina is a product of a broken family. She was only seven years old when her parents separated. However, she was not disheartened by what happened to her parents. Although both have their own individual families, they maintain open communications. “They are on good terms now,” she notes.

Ara Mina is a high school graduate of Morning Dew Montessori. If her schedule permits, she said she plans to take up Interior Design or Fine Arts at the University of the Philippines (UP).

Off-camera, Ara Mina is a sweet, simple person. She doesn’t talk much during interviews.

Although she admits she has had two boyfriends before, one from showbiz, and one from non-showbiz. She prefers to stay at home during her free time and shuns the nightlife.

Ara Mina feels that her job is quite fulfilling at present. In her five-year stay in the business, she has been able to buy a condominium unit, a car, and jewelry. The other earnings go to her savings (time deposit) and her family. She rewards herself by shopping for signature clothes and accessories.

Older men go for her. Ara Mina reveals that she has received around five “indecent proposals” from different men.

(Based on the same writer’s exclusive article published at the now-defunct Mirror Weekly Magazine.)

As of a recent update, Ara Mina is experiencing a new “journey” in her personal life. She is now married to her non-showbiz husband, Dave Almarinez, CEO of Philippine International Trading Corporation (PITC).

74 Replies to “Upclose and personal with Ara Mina”