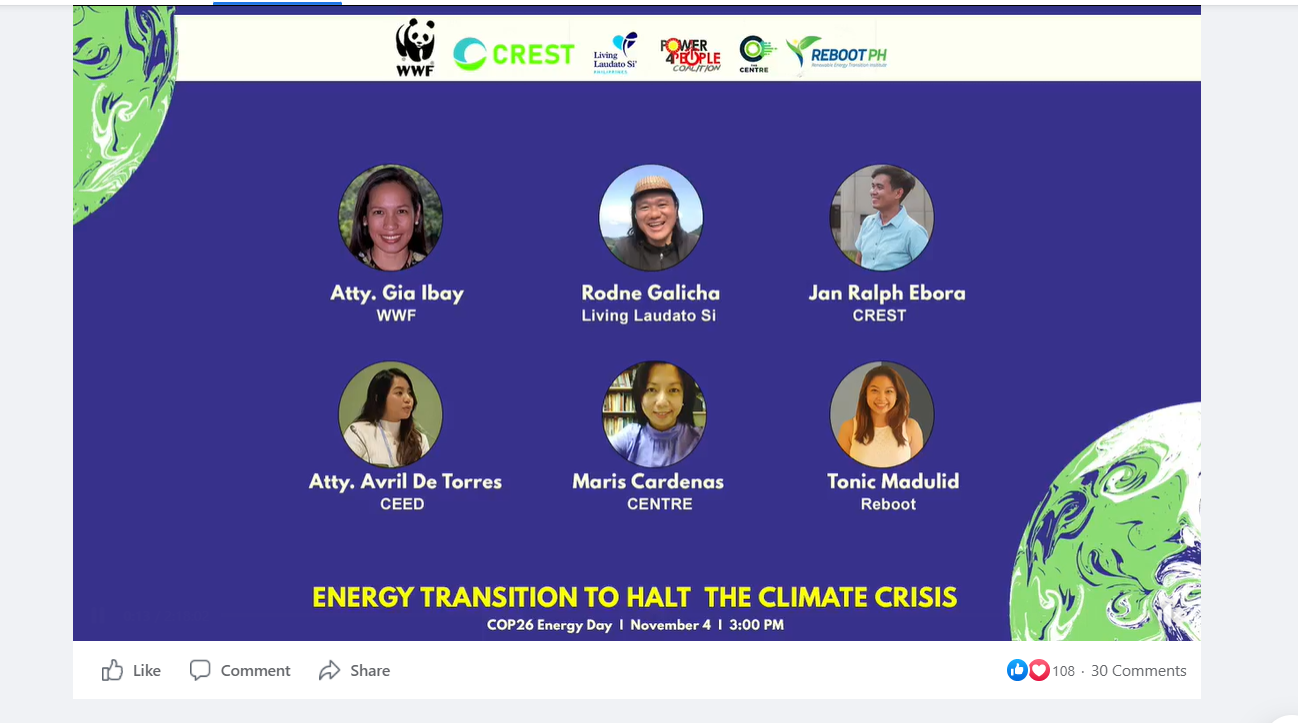 Political candidates in the 2022 national elections must put the climate crisis on their agenda and ensure that the Philippines complies with our international commitments, environmental group WWF-Philippines said.

“The climate, nature, and environment should be on the agenda of candidates along with our advocacies on climate justice and equity. There needs to be a lot of thought and attention on how we will implement the proper actions in line with our international commitments,” Atty. Angela Consuelo Ibay, WWF-Philippines’ Head of Climate and Energy, said.

“I think now is the time to ensure that. We need to lobby with the candidates to put the climate on their agenda and to think of it carefully. All of us will be impacted by climate change and are already feeling it,” she said during an online webinar co-organized by the Center for Renewable Energy and Sustainable Technology (CREST) and WWF-Philippines titled “Energy Transition to Halt the Climate Crisis.”

In the recently concluded UN Climate Change Conference (COP26) in Glasgow, the Philippines was a signatory in the Glasgow Leaders’ Declaration on Forests and Land Use which commits to halting deforestation and restoring forest land, the COP26 Coal to Clean Power Transition Agreement, and the Global Methane Pledge.

The Philippines sent a delegation led by Department of Finance Secretary Carlos Dominguez III to COP26 which ran from October 31 up to November 12. The conference ended one day beyond the schedule due to the negotiations over the text of the Glasgow Climate Pact.

As the election season heats up in the Philippines, Ibay called on those officials to ensure that the agreements they signed in the international conference with hundreds of other countries will become institutionalized and continue to be implemented by the next administration.

“Even though historically the Philippines’ GHG emissions are small compared to developed countries, we should not belittle our contribution to the climate crisis because our emissions are higher compared to 100 other countries and in 2020, we are ranked 7th globally in terms of coal expansion,” Atty. Avril de Torres of the Center for Energy, Ecology, and Development (CEED) said.

“That’s how many coal power plants are planned to be built. And there should have been more coal plants operating and in the pipeline, because back in 2012, the forecasted energy mix of the Department of Energy (DOE) was 70 to 80% from coal,” Torres said.

Torres cited the 2020 coal moratorium by the DOE as an important step in the energy transition as this halted 6 gigawatts of coal capacity. However, a CEED study published July 2021 found that proponents of 10 coal projects are still in the process of obtaining permits while 6 proposed projects were allowed to continue.

Maris Cardenas, Executive Director of the Center for Empowerment, Innovation, and Training on Renewable Energy (CENTRE) emphasized the need to speed up the growth of the renewable energy sector so that it can contribute 35% of the total Philippines energy mix by 2030.

“That target should be higher but the 35% target is already low and yet very hard to achieve,” Cardenas said. “That should be a reality. We need to make the 35% target an imperative and not merely an aspirational target.”