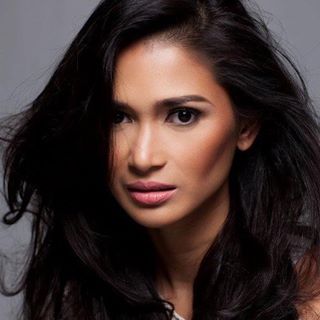 The laundry-conscious mama Lumen we saw on TV commercials wears two martial arts black belts – one for taekwondo and one for aikido.

We saw her lovely face on the boob tube in the role of Lumen, the worldly-wise and ingenious young wife and mom in the once-popular ad series of a detergent. Lumen is January Isaac a.k.a Sandra Gomez (her screen name).

She related that the “Lumen” commercial had contributed a lot to her popularity. However, she doesn’t want to think that it had made her an overnight sensation. “Honestly, I wasn’t expecting it to be a series. I thought it was just one project. For some people, they don’t see what I’ve gone through. It really took some time. But I should give credit to Lumen because that character has really helped me.”

Just like Lumen, she speaks her mind when it comes to being practical. “I weigh things before I buy. I’m very fond of shoes; I like shoes that are unusual and I buy them especially if they’re sporty.”

This lady is not just a pretty face. In real life, she weàrs two martial arts black belts – one for taekwondo and one for aikido. She was introduced to taekwondo at the age of 11 and took up serious training at 15. After two years, she added another sport – aikido.

“My appetite for the martial arts was enhanced when I started joining inter-school competitions,” she said.  Her dad, Pastor Isaac, has become her mentor in a contact sport. “My dad used to be active in martial arts when he was my age. He suggested that I should try it.” More than anything else, it’s more of physical fitness for her. She’s also a semi-vegetarian.

Aside from being a health buff, she’s an artist, too. She loves everything that involves the arts – music, painting (she paints a landscape and still life in watercolor and acrylic), reading literature/classic, and theatre. Her favorite painters are Renoir and Monet.

Since she was eight years old, she has been watching musical plays. “From then on, I started loving it,” she said. “But that’s not the path I’m being led to.” January has taken the path to show business instead. She joined showbiz in 1997 and did some action flicks. What makes her different is that she enjoys her sports and she used it as a vehicle to get into the movies.

However, she doesn’t want to be confined to just doing drama or action movies. As much as possible, she wants to be a character actress “somebody who can be different.” “I don’t want to be stereotyped. I want a little bit of everything,” she quipped. “For me, it’s boring if you stick to just one character. I want to be versatile because that’s the joy of acting.”

Her name, January, was taken by her mother Millicent Joy, after a movie character, January Wayne, in the movie Once Is Not Enough. She was born in Cagayan de Oro City and comes from a well-to-do family. She is the eldest in a brood of three. Her other siblings are Hillary and Erik.

What is her secret of success?

“Believing in the talent that God has given you. Invest in that. Some people have talents but they don’t flourish, they don’t nurture them. For me, I really take care of it,” said the articulate January.

Above everything else, she has a strong faith, being a Christian. “Faith sustains me, that no matter how difficult life becomes, I’ll be okay. Never lose your faith in God,” said January, who has been living in the United States with her husband Wade Bodlovic. The couple has two beautiful children Hunter and Harley.