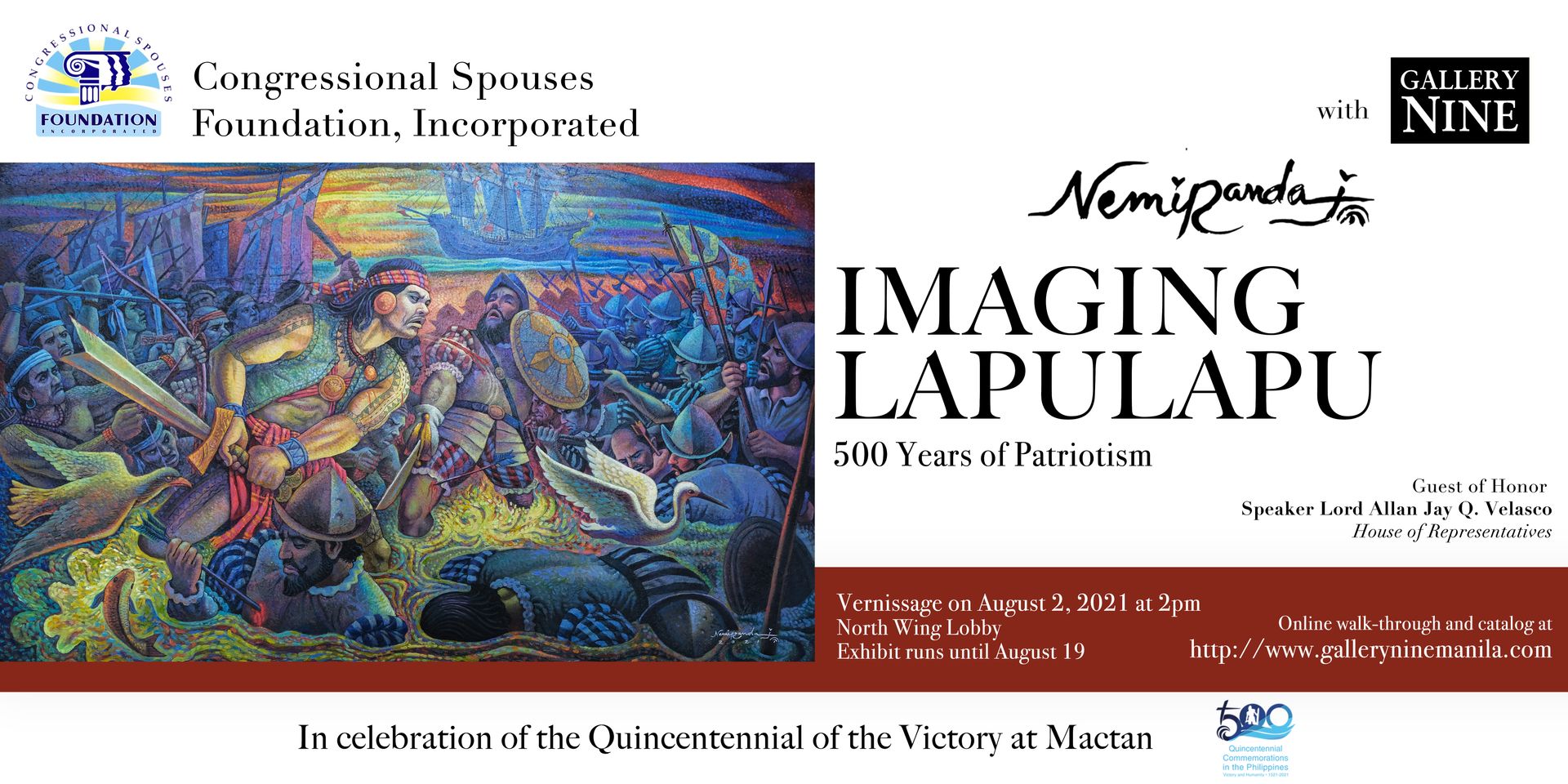 Over pandemic, we have collectively been prompted to look inward, towards our respective histories — something Nemesio “Nemi” Miranda Jr. is intimately familiar with. Nemiranda, as he is also called, is a visual historian and lauded as the “Father of Imaginative Figurism,” conjuring human forms and historical scenarios from his imagination. This year, he has been nominated for National Artist for Visual Arts.

Nemiranda is among Angono’s greats. The Rizal town itself is the Art Capital of the Philippines, as well as the birthplace of one of his two major influences, National Artist Carlos “Botong” Francisco – his other influence being Francisco Coching, the “King of Philippine Comics.”

This year, Nemiranda zooms in on the 1521 Victory of Mactan, where Datu Lapulapu and his warriors defeated the Spanish empire, commanded by Ferdinand Magellan at the behest of Rajah Humabon.

A decade in the making

Nemiranda’s project took root in his mind a decade prior, in a meeting with the director of tourism in Southern Leyte. He explains, “They wanted me to design a concept for Magellan’s discovery of the Philippines: the landing of Magellan in Limasawa Island, the site of the first mass, the first cross monument of the Philippines. From that time on, I had this interest to make a series of paintings on the life of Lapulapu.” Between that time and now, he did his research visiting sites of interest from Mactan to Limasawa Island.

Ten years on, Nemiranda has finished his multimedia showcase, musing that this is the perfect time to celebrate our people’s spirit. “This year, quincentenary natin as a nation, from the arrival of the Bornean datus in the Philippines, doon nagsimula ang kasaysayan natin.”

At the same time, he outlines the project’s personal history: “Everything started in drawings, and eventually I made paintings and sculptures.” Nemiranda’s two-part showcase includes 35 drawings, upwards of 20 paintings, and 25 sculptures on the life and historical events of the esteemed Datu. The first show is currently showcased at the House of Representatives and the second part at Gallery Nine in September.

Surely, Lapulapu is an enduring presence from history books to works of art. He is a symbol of resistance and courage even today. However, this belies how little we actually know about him.

Nemiranda is aware of this, and true to form, he fills in the gaps with his imagination: “Lapulapu is only in a very small portion of the writings of [Antonio] Pigafetta. The exhibit at Gallery Nine is my own concept of who he was, and who he could be. He was an ordinary family man, at the same time he learned a lot of things, and had many talents, many passions for creativity.”

Thus, his Gallery Nine exhibit features 35 pen and ink vignettes into the life Lapulapu might have led. These include his famed victory against Magellan; his civic contributions as a teacher, blacksmith, fisherman, and builder; as well as more tender moments cradling his child, serenading and caressing his beau.

Over at his main exhibit in Congress, he expands his focus: his paintings and sculptures depict the spread of Catholicism in Cebu, interspersed with imaginings of what could have been. Even here, Nemiranda underscores the quieter events in Lapulapu’s life- he kneels in prayer before marching onto the battle, he pays his last respects to fallen rivals. At an unknown point in time, he dreams of hunting a mythical creature in a dreamscape with the fallen Magellan in the foreground.

Nemiranda’s life-work is about arousing inspiration through his imaginative chronicles. His most noted works include a 175-meter-long mural on the history of the Philippine Army at Fort Bonifacio, EDSA I and II murals, paintings and sculptures, and religious works depicting the Mysteries of the Holy Rosary — all in public spaces, for everyone to see. In terms of sculpture, he pioneered the craft of relief sculptures in concrete cement, a technique he had been perfecting for 50 years.

When asked about his vision, he responds, “I want to capture what is happening during my lifetime. I want to tickle the imagination of the audience, I want them to ask, did this really happen? The answer is not a straightforward yes or no.”

Keeping up with the times

Our relationship with memory is dynamic; our perspectives and understandings continually evolve after every recollection. This makes the arts fertile ground for chronicling reimaginations, the industry itself has withstood last year’s challenges through constant reinvention.

As we move ceaselessly towards the future, so too does Nemiranda’s work: “I am not one to stick to a comfort zone. There is always a new subject to capture, life goes on, history happens.” Despite the pandemic’s limitations, he has had a successful stint in the United States just this June. There, he auctioned 35 pieces of his Imaging Lapulapu drawings at the Philippine Consulate at Los Angeles with the Eagle Eye Charities Foundation. He also completed a mural honoring healthcare workers at the Philippine Consulate in New York.

He will also be showcasing a mural study of the history of the Philippine legislative bodies, a project first offered to him in 1990 during Fidel V. Ramos’ term. Despite it not pushing through at the time, he has endeavored to keep updating his study up to the present day.

Nemiranda’s works have never been about a singular event in isolation: “It’s not just about the Victory of Mactan. I want to bring attention to the start of the Filipino fight for freedom, justice, and democracy- up until the present. It is my mission to showcase both past and present-day heroes.”

This quincentenary year, we celebrate in the midst of this pandemic’s major sociocultural changes. Nemiranda’s topics of focus compel us to look back at our history while commanding us to fill in the gaps — not just in history’s blank pages, but for what is in store for us as a nation in the years to come.

“Imaging Lapulapu” will be held from August 2 -19 at the North Lobby, Main Building, Batasang Pambansa Complex, Batasan Hills, Quezon City. Viewing is by invitation only. The exhibit at Gallery Nine will be held in September subject to the lifting of current quarantine restrictions. More details as well as a full 360 walk-through of the exhibit is available online at www.galleryninemanila.com.