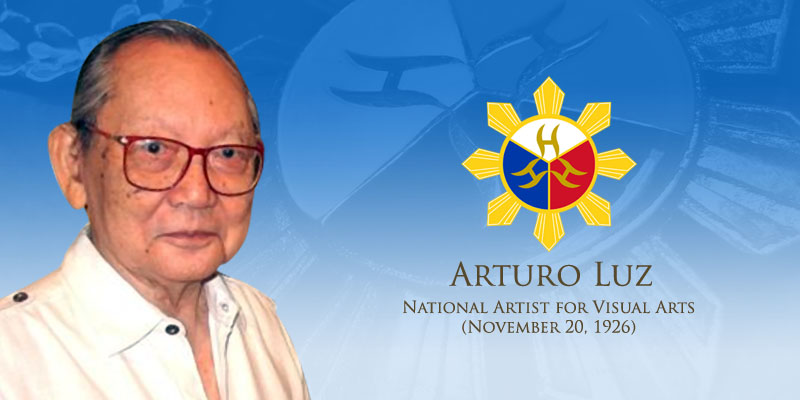 National Artist for Visual Arts Arturo Luz passed away peacefully on May 26. He was 94.

Arturo Luz, painter, sculptor, designer, and esteemed Philippine National Artist in the visual arts passed away Wednesday night, leaving behind a legacy in the arts that “exemplify an ideal of sublime austerity in expression and form.”

His daughter, former TV personality, Angela Luz, announced that the 94-year-old artist passed away peacefully while she was at his side at 8:45 pm on May 26.

“God blessed my father with 94 of the most wonderful years on earth. He enriched our lives with his art, his incredible talent, and his genius. As a father and a grandfather, he was simply the best. He was the most kind and generous human being. And as a husband to my mother, he was perfect. He will be terribly missed, but will never be forgotten. His legacy will live on, and will last forever,” wrote Angela on her Facebook post.

Luz was born on November 20, 1926, and was a founding member of the modern Neo-Realist school in Philippine art. He was educated at the University of Santo Tomas School of Fine Arts in Manila, and then went on to the Art School of the Brooklyn Museum in New York, and to the Académie Grade Chaumière in Paris. He became the director of the Metropolitan Museum of Manila in 1976, holding the position until 1986. He was named National Artist in 1997.

Luz’s notable works include the Carnival series of the late 1950s to the recent Cyclist paintings.

His mural painting Black and White is displayed in the lobby of the CCP’s Bulwagang Carlos V. Francisco (Little Theater). His sculpture of a stainless steel cube is located in front of the Benguet Mining Corporation Building in Pasig.

He produced works that elevated the Filipino aesthetic vision to new heights of sophisticated simplicity.

He established the Luz Gallery that professionalized the art gallery as an institution and set a prestigious influence over generations of Filipino artists. He inspired and developed a Filipino artistic community that nurtures impeccable designs.

One Reply to “His legacy will live on”