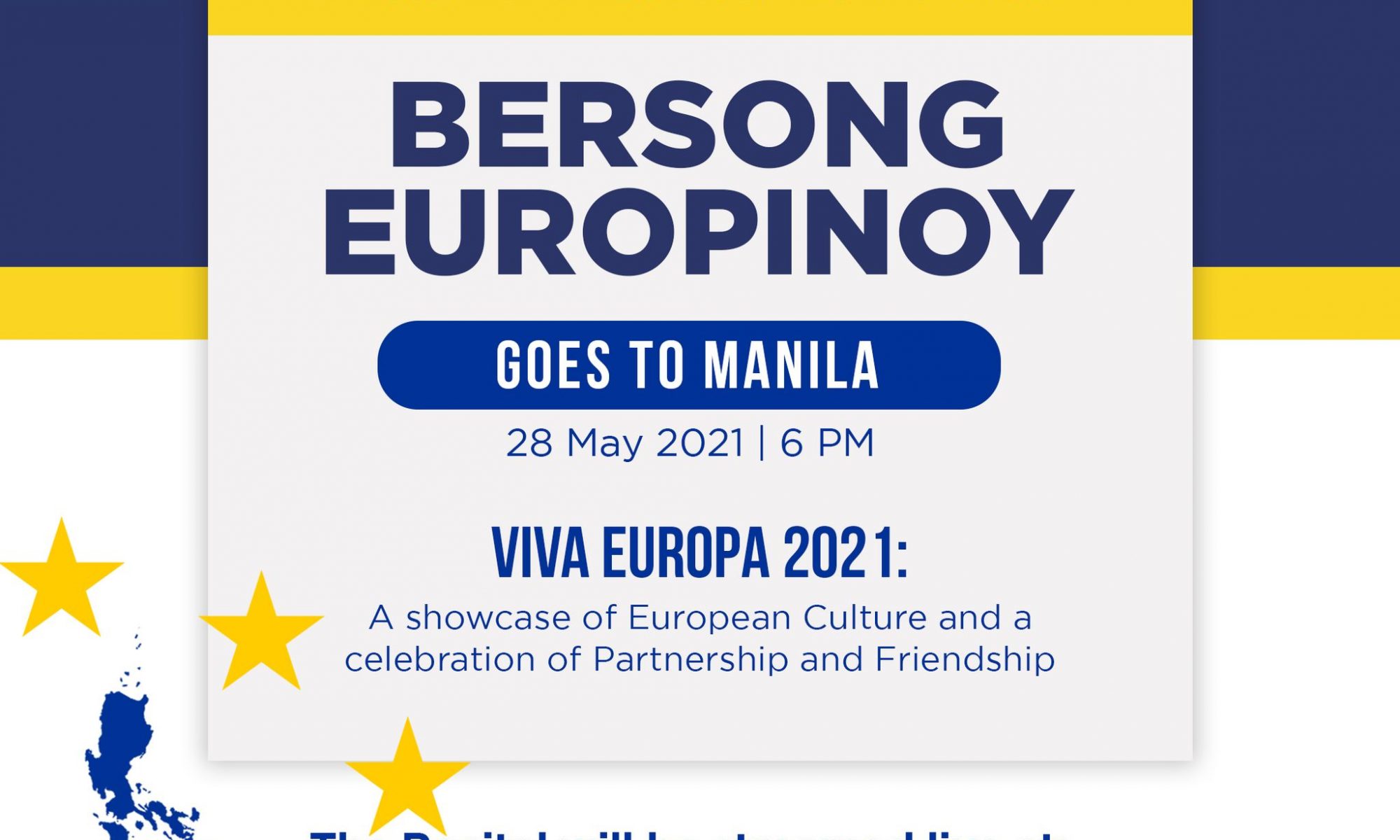 The charm and romance of the European and Filipino languages continue as “Bersong Euro-Pinoy” goes to Manila on 28 May 2021 at 5 pm via facebook.com/EUDelegationToThePhilippines.

Together with the Embassies of Belgium, Czech Republic, Denmark, Germany, Spain, and Instituto Cervantes Manila, France, the Philippine-Italian Association, Hungary, Austria, Poland, Finland, and the De La Salle University Manila, the European Union Delegation to the Philippines is mounting Bersong Euro-Pinoy,  “Pagkakaibigan at Bayanihan”, Verses Versus the Virus, in Manila.

European Union Ambassador Luc Véron said that the poetry recital aims to bring hope, inspiration, and avenues for cultural dialogue to both Europeans and Filipinos.

A brainchild of Instituto Cervantes, it used to be held under the framework of “Dia del Libro” gathering all diplomats and literary enthusiasts from among the members of the EU Delegation to the Philippines, EU member states’ embassies, and cultural institutes. The festival will be hosted by journalist and EHEF goodwill ambassadors Dr. Danie Laurel and  Erasmus+ scholar Kate Ramil.

EU in partnership with the Green Archer

This time, literary luminaries mobilized by the De La Salle University Manila will join European poets and readers.  Poems to be recited adhere to the theme of “Pagkakaibigan and Bayanihan”.

Dr. Mesándel Virtusio Arguelles is the author of 20 books of and about poetry, most recently Atra: Mga Tula 1999 – 2019 (Balangay Books, 2020) and Three Books (Broken Sleep Books UK, 2020), with translations by Kristine Ong Muslim and illustrations by Erika M. Carreon. He works as a book editor and translator, and teaches literature and creative writing at  DLSU.  He will read “Kasama” (“Comrade”).

Dr. John Iremil Teodoro teaches literature, creative writing, and art appreciation at the Literature Department of  DLSU where he is also the Associate for Regional Literature at the Bienvenido N. Santos Creative Writing Center.

A multilingual writer, he has published more than 15 books of poetry, fiction, and creative nonfiction in Kinaray-a, Filipino, Hiligaynon, and English. He is currently the secretary-general of Unyon ng mga Manunulat sa Pilipinas (UMPIL) or the Writers Union of the Philippines. He will recite “Sa Hardin sang Ginuo: Isa Ka Pangamuyo sa Tiempo sang Pandemya” (Hiligaynon) / “In the Garden of the Lord: A Prayer During the Time of the Pandemic.”

Carmie Ortego is a teacher for senior high school at National University and a creative writing graduate student of  DLSU. She has earned fellowships from the 13th Iyas and 20th Iligan national writing workshops for her poetry in Cebuano and the Pasidungog Eduardo Makabenta Sr. Para han Siday for her poetry in Waray.  Her piece is “Paglakát mo nag-lipstick ako hin pula (When you left I put on red lipstick)”.

Dr. Genevieve L. Asenjo is a professor of Literature and Creative Writing and Chair of the Department of Literature, De La Salle University, Manila.  She is included in the 2018 Cultural Center of the Philippines Encyclopedia of Philippine Art (Literature) for her works in Kinaray-a, Hiligaynon, and Filipino.

Poets and Readers from the EU