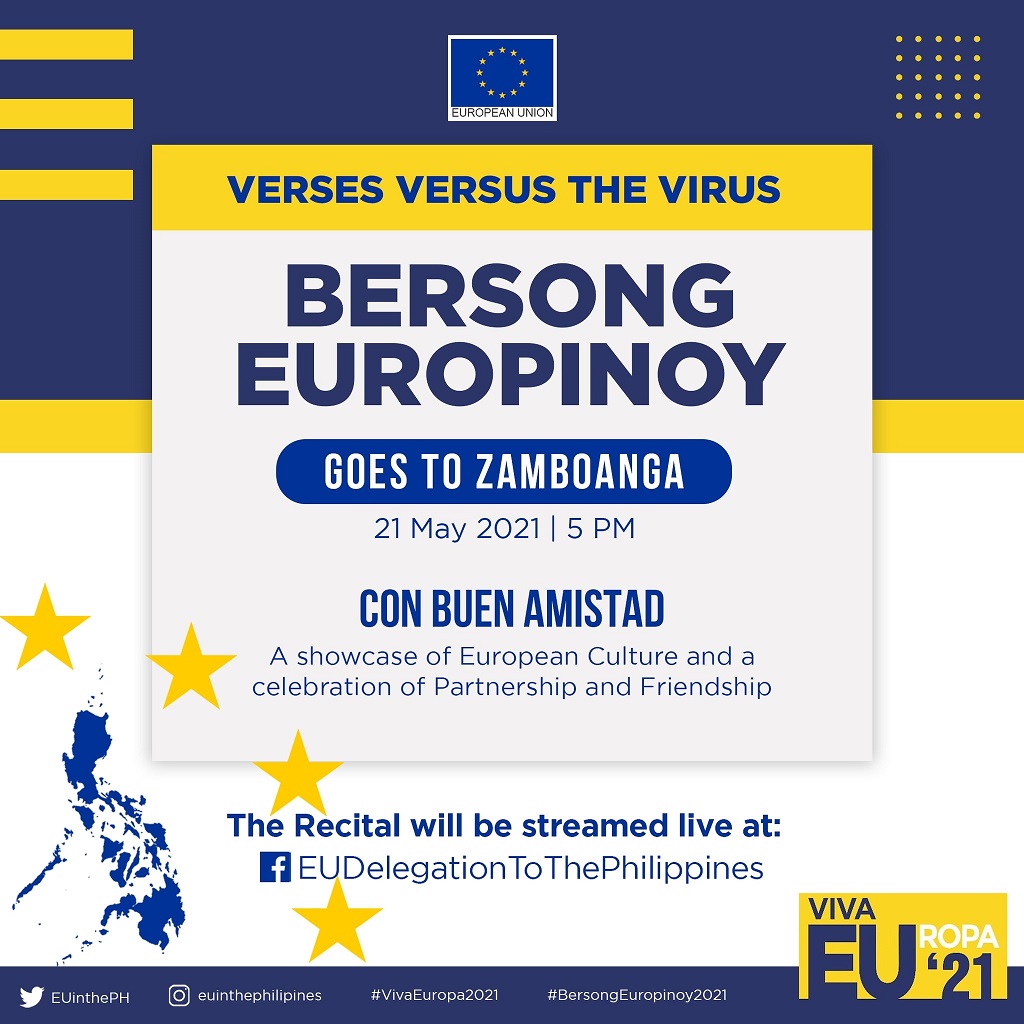 The fire and fervor of European verses coupled with Chavacano and other languages from Southern Philippines continue this May through this literary festival.

It is Viva Europa time once again! Allow us to ignite the fire and passion in your hearts as the European Union brings back “Bersong Euro-Pinoy” on 21 May at 6 pm in Zamboanga.

The fire and fervor of European verses coupled with Chavacano and other languages from Southern Philippines continue this May through this literary festival.

The EU Delegation to the Philippines has worked in tandem with the Embassies of Belgium, Czech Republic, Denmark, Germany, Spain, and Instituto Cervantes Manila, France, the Philippine-Italian Association, Austria, Poland, Finland, and Ateneo de Zamboanga University.

Dubbed “Con Buen Amistad,” or “Friendship and Partnership”, this poetry recital (Verses Versus the Virus) will be streamed live at the FB page of the EU Delegation to the Philippines:

European Union Ambassador  Luc Véron, a patron and lover of literature himself,  said that Bersong Euro-Pinoy will provide a platform for European and Filipino poets and literary enthusiasts to better understand and appreciate each other’s culture and to strengthen people-to-people links between and among Europeans and Filipinos.

With the “new normal” being in place, this cultural journey is even easier.

A brainchild of Instituto Cervantes, it used to be held under the framework of “Dia del Libro” gathering all diplomats and literary enthusiasts from among the members of the EU Delegation to the Philippines, EU member states’ embassies and cultural institutes.

These poets were mobilized by the Ateneo de Zamboanga University, this year’s academic partner along with De La Salle University.

“The Ateneo de Zamboanga University is very grateful to be part of the European Union Delegation to the Philippines’ Poetry Recital this year. In these trying times, we need words that build, words that bring comfort, words that heal, and this literary event provides that. Let us continue to seek inspiration from friendships that flourish, and celebrate our freedom to collectively rise above difficulties”, said Fr Karel San Juan, President of Ateneo de Zamboanga University.

Sigrid Marianne Gayangos will read his poem Cuando ya busca yo con el maga palabra with English translation by Floraime Oliveros Pantaleta (When I was searching for the words);

Literary Masterpieces Around the EU

Norac’s work has been translated into 47 languages. His bilingual children’s book “My Daddy is a Giant” appeared in Tagalog-English in 2005. In 2009, Norac received the Grand Prix de la Société des Gens De Lettres. He will recite his original works: “Pour Marcel Moreau” – For Marcel Moreau, his friend who is a Belgian writer too and who has unfortunately recently passed away and  “Pour Mustafa, pour Mustafa Kör” (For Mustafa, for Mustafa Kör), a poem dedicated to Mustafa Kör who will in fact succeed him in January 2022 as a National Poet.

La Punta della Lingua” is an international festival, based in Ancona, Italy, dedicated to “TOTAL POETRY” that since 2006 continues to explore possibilities of interaction between poetry texts and moving images as well as other forms of hybridization of poetry with the web, theater, music, and cinema.