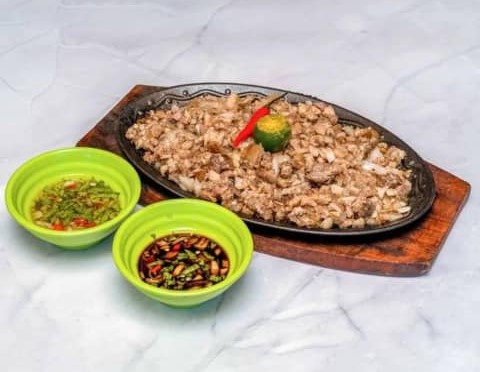 Your trip to Pampanga will never be complete without dining at Aling Lucing Sisig, which serves the authentic Kapampangan sisig recipe and the “Best sisig in Pampanga,” on the accounts of countless visitors both local and international who have tasted it. Even the late celebrity chef Anthony Bourdain described it as a “sweet symphony of pig parts” in his former TV show Parts Unknown.

Aling Lucing’s Sisig is made from pig’s head and liver, boiled, grilled, and chopped. During our last visit to the restaurant a couple of years ago, we totally enjoyed the dish and very satisfied with the tenderness of the pig parts. It is best served on a sizzling plate.

Based on the narrative, the dish was discovered from a happy accident. The owner, Lucia Cunanan, more known as Aling Lucing, accidentally burned a pig’s head on the grill. Not wanting to throw out the burnt pork in the belief that it’s a sin to waste food, she chopped it up into small pieces and mixed it with calamansi and onions.

Aling Lucing tried her new dish and realized it was good. She uttered, “Magumpisa ngeni, ing awus ku keka, sisig!” “From now on, I will call you sisig!” Since then, Aling Lucing has been known as the “Sisig Queen.”

According to their FB post, Aling Lucing started serving it to customers, not expecting that they would love it. Back then, she had no idea that she has just made a culinary revolution. And would later become the inspiration of other modern sisig.

Aling Lucing Sisig was established in 1974. At that time, their food cart business was situated along the railroad crossing where Filipino workers and American servicemen in Clark used to gather for lunch.

Aling Lucing and daughter Zeny would go there to assemble foldable chairs and tables for their customers while maintaining their eatery in the wet market in Angeles. The locals called her Dang Lucing but many of the Clark employees were Tagalog speakers so she became popularly known as Aling Lucing.

Owing to the popularity of her version of sisig, Aling Lucing Sisig has been featured in various local newspapers, magazines, and TV shows. The sisig dish was also introduced to other countries through the Filipino diaspora around the world. It is often advocated abroad by local and foreign chefs alike, bringing Filipino cuisine to the forefront of the global dining scene.