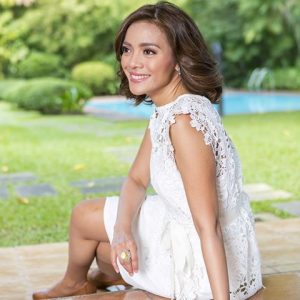 Newscasters have to be very well-versed on almost anything. “You just have to constantly prepare yourself. The more experiences you have along the way, the better for you in the long run,” shares Vicky.

After more than 25 years in the broadcasting industry,  broadcast journalist Vicky Morales is very much comfortable with herself. She feels no pressure to equate the achievements of others with her or to even surpass their achievements.

“I’m happy the way I am now,” relates Vicky from a previous exclusive interview. She’s now a regular anchor for 24 Oras along with Mel Tiangco and Mike Enriquez. She’s also hosting Wish Ko Lang and Good News. She’s one of the pillars of GMA News and Public Affairs.

Vicky first took up BS Management at the Ateneo de Manila University then shifted to Communication in her second year. A consistent dean’s lister, she graduated in 1990 with First Honors and was nominated by the Ateneo to the 1990 RFM – Rotary Search for the Ten Outstanding Students of the Philippines.

Vicky’s start in broadcasting wasn’t smooth. Her professor gave her a bright recommendation for a job with ABS-CBN. She was assigned as a segment reporter but her stint didn’t last very long. She was singled out among more than 500 applicants for a newscasting job in GMA Headline News but she was taken off after three to four months.

Tina Monzon-Palma, at that time head of GMA’s news section, told her frankly that she didn’t really appear well-versed with the news and looked very nervous. Vicky remembered crying when she lost her first newscasting post. But she always looked back to it as a point of the challenge.

Vicky, of course, got another chance. Dong Puno took her on his then daily morning talk show called Business Today (re-launched into Good Morning Asia in 1997). Vicky co-hosted, produced reports, and wrote news for this show.

In time she had honed her skills enough to make a comeback on GMA Network News, then co-hosted with Mike Enriquez. She also produced reports for Saksi. In 1997, she was sent for a month-long training program on Television News Production at New York University in the USA.

Vicky feels she’s being challenged every day. According to her, every day presents new challenges. In a way, there’s so much element of surprise in the business.

“You wake up each morning not knowing what will actually happen, what assignment you can actually be given,” she quips.  “You just have to constantly prepare yourself. The more experiences you have along the way, the better for you in the long run.”

Every day, Vicky prepares herself before facing the camera. “It is really the long-term preparation of myself. I go through my scripts then I make my own corrections because I want it to be based on my speaking style,” she says.

Vicky’s antidote to her early nervousness was to continuously arm herself with broad information. This means newscasters have to be very well-versed on almost anything.

On integrity and public trust

Vicky shares her pieces of advice for aspiring broadcasters. She relates that aside from proper skills, integrity is very important because news is based heavily on public trust.

“I think you should never compromise this trust. Take good care of that trust by verifying the news, you should not be paid to say what you say,” she points out.

She underscores as well the importance of attitude – aggressiveness, curiosity, energy, persistence, and drive. Teamwork is also crucial.

“You have to get along well with people. The news is all about a lot of people working together to deliver a good product. And last but not least is knowledge of current events. It’s actually a habit that you should acquire. Especially in an ambush interview, you have to think on your toes.”

One important lesson she learned from the trade is that there are always “two or more sides in the story.”

She explains: “No matter how believable one person can sound, people should be given the benefit of the doubt. It’s about fairness and objectivity. For me, I try to get both sides of the story as much as possible. Sometimes, we have our own personal biases, but we have to put that aside.”

She credits her parents with the value of hard work and money even though they are quite well-off. She’s blessed with blissful family life. Vicky is married to Alfonso Reyno III, a lawyer, and mother to twins Leon Alfonso and Filippo Luis, and daughter Daniela.

The broadcast business, she points out, doesn’t really remunerate very well, “But if you work hard enough then it could be rewarding in other terms,” she concludes.

5 Replies to “A flourishing career for Vicky Morales”