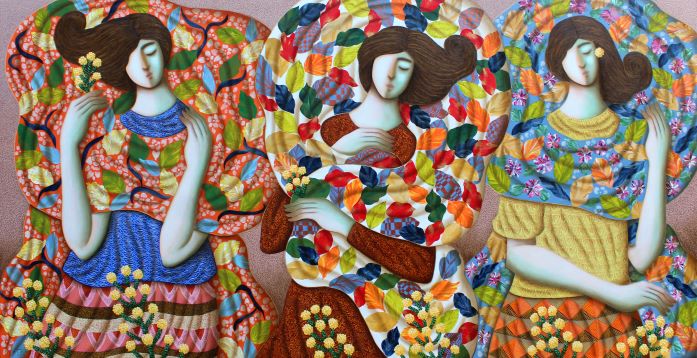 In their colorful strokes and patterns, Nacion and Yeung Yap draw out the hymns of nature, and of humanity, if we but pause and take the conscious effort to notice and join in. Their works will be on exhibit at The Art Center, 4L SM Megamall Bldg. A until March 28, 2021, presented by Galerie Francesca.

When the lockdowns started precisely a year ago, it felt as if the world stood still.  For the first time in memory, there were no cars and buses on EDSA for weeks on end.  The MRT stopped.  The streets were empty.  Markets and malls were closed.  It was as if the city’s busy heart suddenly stopped.  And it was like this around the world, as people stayed home to avoid getting sick and to help halt COVID-19 in its tracks.

Everyone was anxious, and some, even afraid.  But then, the unexpected happened.  We saw the crisp blue sky when once there was a hazy gray. We saw the horizon hosting glorious sunsets and hopeful sunrises when we could not be bothered to look before. We heard birds sing over parts of the once busy metropolis where only the blaring bus horns and vehicle engines once roared.

Growing plants indoors became an obsession for many. We spent time with our families and bonded over shared meals and the simplest of things. And we collectively realized that the world will continue without us, but we cannot continue without the world.  Despite the looming threat, we found a tenuous peace; a temporary truce between the relentless pursuit for progress and the battered nature that has always been around us.

This is the inspiration for NATURE’S HYMNS, a joint painting exhibition by Francis Nacion and Melissa Yeung Yap at the Megamall Art Center.  Presented by Galerie Francesca, Nature’s Hymns will run until March 28.

Nacion and his intricate paintings

Francis Nacion Jr. is known for his intricately sgraffitoed paintings, with complex patterns scratched on wet oil paint to reveal a contrasting color underneath.  These patterns he uses to adorn his imageries of calm, peace, and bounty, through his signature figures which are often depicted with only half of their faces shown.

An artist with a wide following, his collectors is equally attracted to his brightly colored paintings, as they are to the peaceful and cheerful subjects he often portrays.  Traditional subjects that espouse joyful tranquility like mother and child, the traditional harana, women with baskets of fruit, and fishermen with an abundant catch are among the usual subjects of his oeuvre.  But the avid Nacion collector would notice that bountiful nature is often the backdrop of the majority of his works; an essential foil to the paradisical state his subjects enjoy.  For Nacion’s works, life is lived in abundance and prosperity.  And this is what he brings to the fore on this important exhibition.

Yeung Yap’s art as her medium of empowerment and advocacy

Joining Nacion in this endeavor is artist-advocate and protean businesswoman Melissa Yeung Yap.  Yeung Yap has received numerous accolades, such as the CNN Leading Women (2020), Ramon V del Rosario Siklab Award (2019), and The Outstanding Young Person Award (2013) which allowed her to be presented to the Imperial Highnesses Crown Prince Naruhito and Crown Princess Masaka of Japan in 2013,  for her many advocacies which involve empowerment of various marginalized sectors of society such as poverty-stricken communities, war-torn communities, disaster areas, and contested indigenous peoples’ lands.

Her “bunny suit project” during the height of the ECQ last year, channeled laboratory “bunny suits” of the laboratory technicians of their family-owned Katinko Oils and Ointments into PPE’s badly needed by our country’s medical frontliners during the months that PPE’s were already running out as imported goods could not make it through our closed ports.  She solved this problem by creatively tapping local, then unemployed, seamstresses of Tarlac; hitting two birds with one stone – providing much-needed PPE’s to our medical frontliners as we waited for supplies to come from abroad while providing gainful employment to a great number of women and their families.

Yeung Yap has also used art, both as a medium for empowerment and as a means of bringing her advocacies to the fore.  She has used art as therapy for the children in post-war Marawi.  And she uses Philippine indigenous handwoven fabrics like t’nalak, a handwoven fabric which is an important product of the T’boli in her artworks, hinabol woven by the Higaonon of Bukidnon, and inabel by the Tinguian of Abra, in an effort to sustain their traditional weaving and make it a viable source of livelihood for them. Whenever possible, she integrates meaningful patterns from these textiles into her paintings, when their context is applicable, to make people aware of the significance of these cultural products and make Filipinos proud of their collective heritage.

In “Nature’s Hymns,” Yeung Yap integrates indigenous handwoven fabrics and patterns with her nature-inspired oil paintings, symbolizing the harmony the indigenous peoples have achieved with their surroundings, allowing for their communities and culture to flourish over millennia sustainably.

Simultaneous to this, her work also points to the marginalization our indigenous peoples have experienced when our country took on a cash-based economy.  Having worked with them in various capacities, she values the wisdom of their culture and the personal interaction and communal integration which they value so much.  She collages these fabrics and patterns into foliar paintings or into the collaborative work between her and Nacion, of women seemingly garbed with colorful, entwining living flowers and leaves.

One of the pandemic’s silver linings is that it showed what can be possible if we just put our act together.  The quality of life we have can be improved by working with nature, rather than subduing it.  And that progress must not be at the cost of the time we have with our families.  Nacion and Yeung-Yap point to the middle path, a sustainable life lived leisurely, if we but open our eyes to the beauty of what we can do.  In their colorful strokes and patterns, Nacion and Yeung Yap draw out the hymns of nature, and of humanity, if we but pause and take the conscious effort to notice and join in.

“Nature`s Hymns” Nacion X Melissa Yeung Yap will be on exhibit at The Art Center, 4L SM Megamall Bldg. A until March 28, 2021. For inquiries, please call 79144437 or email galeriefrancesca.mega@gmail.com