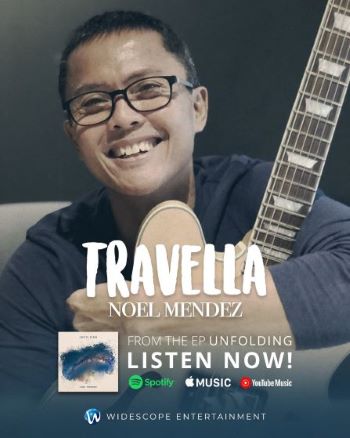 The EP’s carrier single, “Travella” is consistent with the theme of a journey that is pervasive throughout this batch of recordings.

He is best known for gracing the hit recordings and live performances of OPM icons like Martin Nievera, Gary Valenciano, Regine Velasquez, Side A, and the late, great Francis M. He has also backed up several visiting foreign acts like Julia Fordham, Pattie Austin, David Pomeranz, Kevyn Lettau, and many more.

It may not be a known fact to everyone, but Noel is a proficient composer as well and has written music for bands like HAYP and Second Wind.

Noel has also released his first full-length album, Halaga back in 2013. Eight years later, Noel is re-releasing a subsequent batch of original songs aptly called Unfolding under the Widescope label.

“The album, in essence, is like an imaginary (chimeric) journey. The title track, ‘Unfolding’ is like a space trip. ‘Clear Blue’ is to Water while ‘Passage’ is to life journey since I composed it for friends who’ve gone ahead. ‘Going Somewhere’ asks just that. Journey pa rin,’ Noel shared in describing the tracks that consist of the new EP.

Lending support to Noel in the making of Unfolding is Albert Tamayo who mixed all the five tracks, sax player Ronald Tomas and vocalist Annie Quintos who played and sang respectively on “Going Somewhere” and flugelhorn player Lester Sorilla who played on the title cut.

The EP’s carrier single, “Travella” is consistent with the theme of a journey that is pervasive throughout this batch of recordings.  Noel himself played all guitars and programmed the bass and drums and arranged all the tracks.

Thrilled with welcoming Noel into the Widescope family, Widescope Entertainment’s Artist & Repertoire Manager Ebe Dancel, an accomplished musician himself, deems it a “huge honor” to work with someone he considers as “one of the most respected musicians in the industry.”

Meanwhile, Widescope’s Music & Entertainment Director Neil Gregorio considers Noel as “undoubtedly one of the best guitarists of our time.” “We are glad to be part of his journey in sharing to all his world-class music,” Neil further stated.