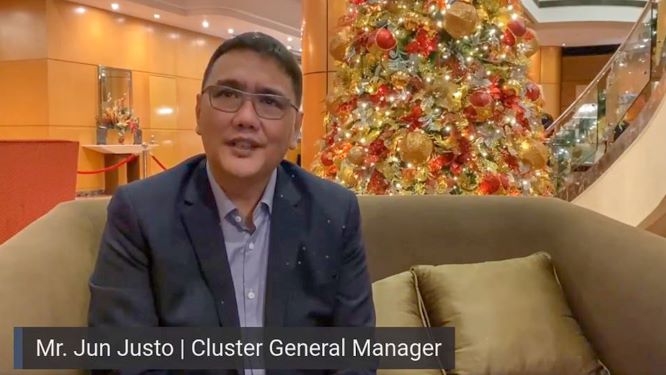 Aptly entitled “Now and 10”, the online program commemorated a decade’s worth of warm, Filipino hospitality—from the time it opened its doors in 2010 to this day as it operates in the new normal.

Eastwood Richmonde Hotel recently celebrated its tenth anniversary with a public virtual event streamed via its official Facebook page. Aptly entitled “Now and 10”, the online program commemorated a decade’s worth of warm, Filipino hospitality—from the time it opened its doors in 2010 to this day as it operates in the new normal.

In his welcome remarks, Cluster General Manager Jun Justo expressed his appreciation to the hotel’s patrons, associates, and stakeholders for their unwavering support which has allowed Richmonde to overcome the obstacles brought about by the pandemic. He further maintained the hotel’s commitment to protecting the wellbeing of guests with its strict “Safe Stay” protocols and declared his optimism that the best is yet to come for the hotel and its guests.

Megaworld Hotels’ Group General Manager, Ms. Cleofe Albiso, on the other hand, in her anniversary greeting, extended her congratulations to the management and staff of Eastwood Richmonde Hotel for being an integral part of Eastwood City, the pioneering mixed-use township in the metro developed by Megaworld Corporation. She also commended the hotel employees for their loyalty and dedication to their jobs and shared her hope that they continue to be inspired to provide exceptional service in the years to come.

Program highlights included the announcement of winners of the Now and Ten Photo Contest where past and present guests shared on social media their most memorable experiences at Eastwood Richmonde Hotel, and the first-ever Kitchen Masters: Home Edition where self-taught amateur chefs presented their original heirloom recipes in a cook-off judged by some of the country’s renowned culinary heavyweights, namely Chefs Bruce Lim, Kel Zaguirre, Myke Tatung, Robb Pengson, and Sau del Rosario. Winners took home hotel gift certificates while the Kitchen Master champion received an additional cash prize and the distinction of having his winning dish featured at Eastwood Café+Bar.

Eastwood Richmonde Hotel is located at 17 Orchard Road, Eastwood City, Bagymbayan, Quezon City, and is a member of the Megaworld Hotels group. For more hotel information, log on to www.eastwoodrichmondehotel.com.ph and follow Facebook.com/EastwoodRichmondeHotel and Instagram.com/Richmonde_ERH.