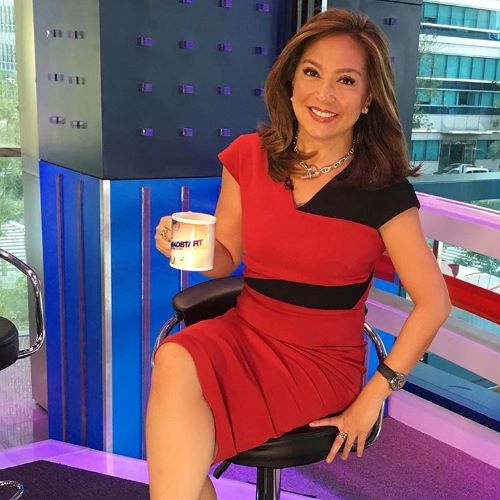 “I want to influence people in a positive way,” said the multi-awarded broadcast journalist. “Be ready to work hard. If you invest in hard work, people will respect you.”

Few encouraging words from a teacher went a long way for Karen. As a young student at the University of the Philippines, she contemplated a career in fashion design. Then one of her teachers noticed her good enunciation and said she had potential as a newscaster.

“That was the first time anybody ever said that I was good at that,” she said, looking back. That’s when she decided to seriously pursue broadcast journalism. She graduated in 1993 from UP’s College of Mass Communications, and after a series of auditions, got her first job on the Business Today, a former morning show on GMA-7 with then Mon Isberto and Rico Hizon as anchorpersons. Before she knew it she was also doing the hourly news breaks.

In 1994, she joined Brigada Siete with the late broadcast journalist Louie Beltran, where she honed up on investigative reporting. A bigger break came in October 1995 when she was tapped as the news anchor for Saksi, GMA’s primetime Tagalog newscast. At this time, too, Karen became a contributing reporter of GMA News to CNN World Report. In 1996, she was given the opportunity to train for a month-and-a-half at CNN headquarters in Atlanta where she met CNN founder Ted Turner. In 1997, Karen was a finalist for the Best Environmental Report for CNN World Report.

After more than 24 years of television and radio experience, Karen is not one to rest on her laurels. She won the much-coveted TOYM (The Outstanding Young Men) Awards for Broadcasting in 2008 and TOWNS (The Outstanding Women in the Nation’s Service) Award for Broadcasting in 2013. In 2010, Karen was chosen as a Young Global Leader of the World Economic Forum, an honor given to young exceptional professionals below 40 years of age. This has allowed Karen to take exclusive leadership courses at the Harvard Kennedy School, Yale, and Lee Kwan Yew School of Government. She has moderated televised sessions for the World Economic Forum East Asia Summits in Manila and Jakarta.

Moreover, she has won numerous local awards including Rotary Club’s Journalist of the Year in 2004 and several accolades from UST, UP, and De La Salle Award giving bodies. She is a Hall of Fame Awardee with the Anak TV Awards, consistently considered as a top role model for the youth.

Karen said her work is physically exhausting and fulfilling. “There’s a big difference if you just read the news or you’re just a TV personality. But I also go out in the field, come back to make my reports then host the show. It’s really a lot of work,” she quipped. At present, she can be seen in three live daily TV and radio programs—interviewing newsmakers on Headstart, a news talk show that airs 8-9 am on the ABS-CBN News Channel or ANC; anchors TV Patrol and The World Tonight, the late-night newscast on ABS-CBN.  As a volunteer, she has involved herself with Habitat for Humanity and World Vision in the last 10 years as an advocate for women and children.

But Karen is not really complaining. “I want to influence people in a positive way,” she related. “I think television plays a major role in its viewers. That’s partly why many love Oprah because she’s so positive. The TV can be that way; you can empower the viewers. I’d want the people to be encouraged just by, let’s say, my life or just watching the shows that I’ve done. I want to give them something.”

What’s the meaning of life?

“If you’ve read the book of Ecclesiastes, Solomon asks, ‘What’s the meaning of life?’ I ask that, too. I say, ‘this is it.’ Fine, you’re on TV and people know you. The real point in life is to truly find who you are in God’s eyes, everything else is secondary,” shared Karen, who is a Born Again Christian.

More than anything else, she wants to do good stories. “I want to be able to do a program that rates and is less sensational. I believe that a Tagalog show can reach more people. I have this thing about change-your-life-TV. It’s like viewers have to get something from you. They shouldn’t be just entertained by your presence. Time has to come that you have to give them something,” rationalized Karen, who also hosts and writes for a weekly news magazine TV show, called My Puhunan, an inspiring business program that features rags to riches stories on ordinary Filipinos hitting it big thru entrepreneurship.  “But the most important is to have a personal relationship with God. Why? Because you don’t know what God has in store for you.”

Her advice to aspiring broadcasters: “First, you should do your homework in all honesty,” said Karen. “You have to prepare well before the show. It’s important that you know the issues for the day; a newsperson should be ready to adlib whenever hassles occur during the live telecast.” She added: “The glamour part is the fact that you come out on TV and people recognize you. But be ready to work hard. If you invest in hard work, people will respect you.”